Part 1: The Rings of Saturn

On the morning of July 25, 1610, Galileo pointed his telescope at Saturn and was surprised to find that it appeared to be flanked by two round blobs or bumps, one on either side. Unfortunately, Galileo’s telescope wasn’t quite advanced enough to pick out precisely what he had seen (his observations are now credited with being the earliest description of Saturn’s rings in astronomical history), but he nevertheless presumed that whatever he had seen was something special. Keen to announce his news and thereby secure credit for whatever it was he had discovered, Galileo sent letters to his friends and fellow astronomers. This being Galileo, the announcement was far from straightforward.

Each message that Galileo sent out contained little more than this jumbled string of letters:

which when rearranged correctly spelled out the Latin sentence,
“altissimum planetam tergeminum observavi”—or “I have observed that the highest planet is threefold.”

As the outermost planet known to science at the time, Saturn was the “highest planet” in question. And unaware that he had discovered its rings, Galileo was suggesting to his contemporaries that he had found that the planet was somehow divided into three parts.

Although reflection from the rings increases Saturn's brightness, they are not visible from Earth with unaided vision. So when Galileo turned his telescope to the sky, he became the first person to observe Saturn's rings, but he could not see them well enough to discern their true nature. 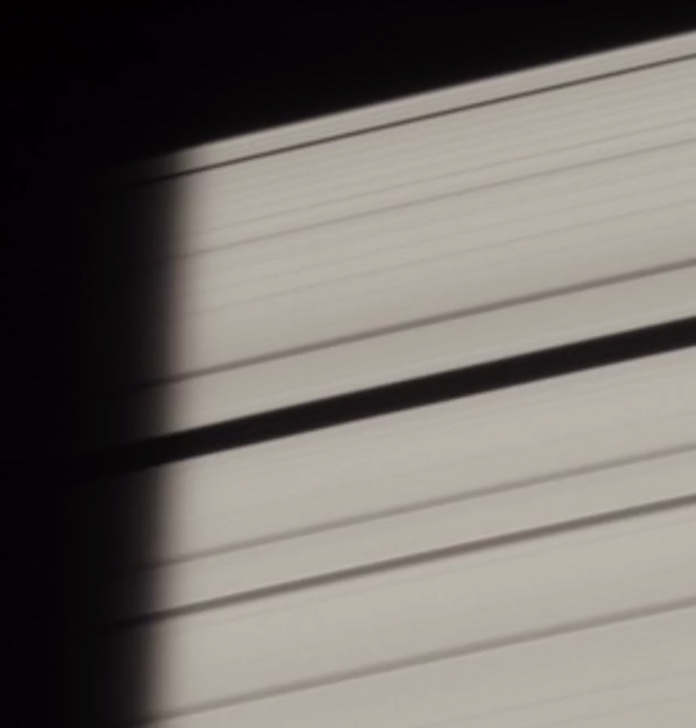 In 1983-1993 I was a music teacher, product demonstration specialist and workshop-seminar instructor in multiple music stores, where I spent many hours each day playing on and learning about electronic keyboards, both analog and digital synthesizers, various types of samplers and an assortment of computer-assisted music systems from manufacturers including Yahama, Roland, Kawaii, Kurzweil, Korg and Ensoniq. In the process, I began using sequencers and drum machines, along with multi-track recording equipment combined with Digital PCM-encoding devices. Because creating music in these new ways was so exciting to me, I was really inspired by all of this and started designing sounds, and producing and recording new types of music projects. One of these new projects was a Suite of Songs that I called "Saturn's Rings". The main themes from that project were the beginning of what has turned into The Highest Planet Project. 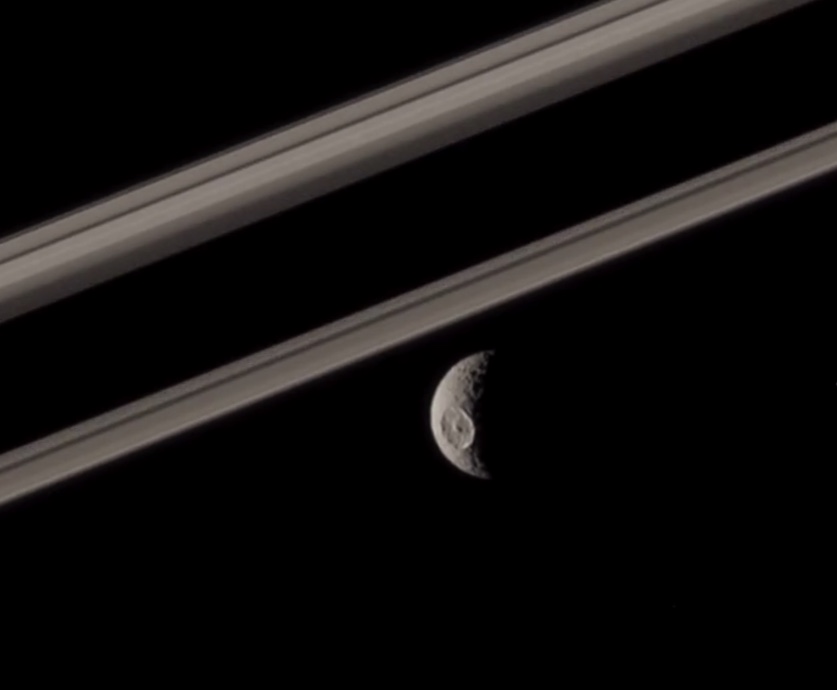 Throughout the late '90s and early aughts, I continued to experiment with sound design and recording using workstation keyboards and computers. I learned a lot about self-producing music, and realized that I could be quite ambitious in the scope of my musical concepts. So about ten years ago, I started going back to previous music that I'd worked on, which included re-arranging the separate songs from Saturn's Rings. I was motivated to produce these orginal compositions in two distinct Suites or groups of musical pieces, that consist of A) Saturn’s Rings and B) Saturn’s Satellites. Each being a sort of musical story-telling about the history of the discovery and observations of the various Rings and Moons of Saturn. The ideas for the various themes also relate to the names of the Rings and Moons themselves, which invariably are named from deities of the Roman and Greek pantheons, or in the case of fainter and more distant celestial objects --which can't be seen with a naked eye-- generally got their titles from the people who found them. 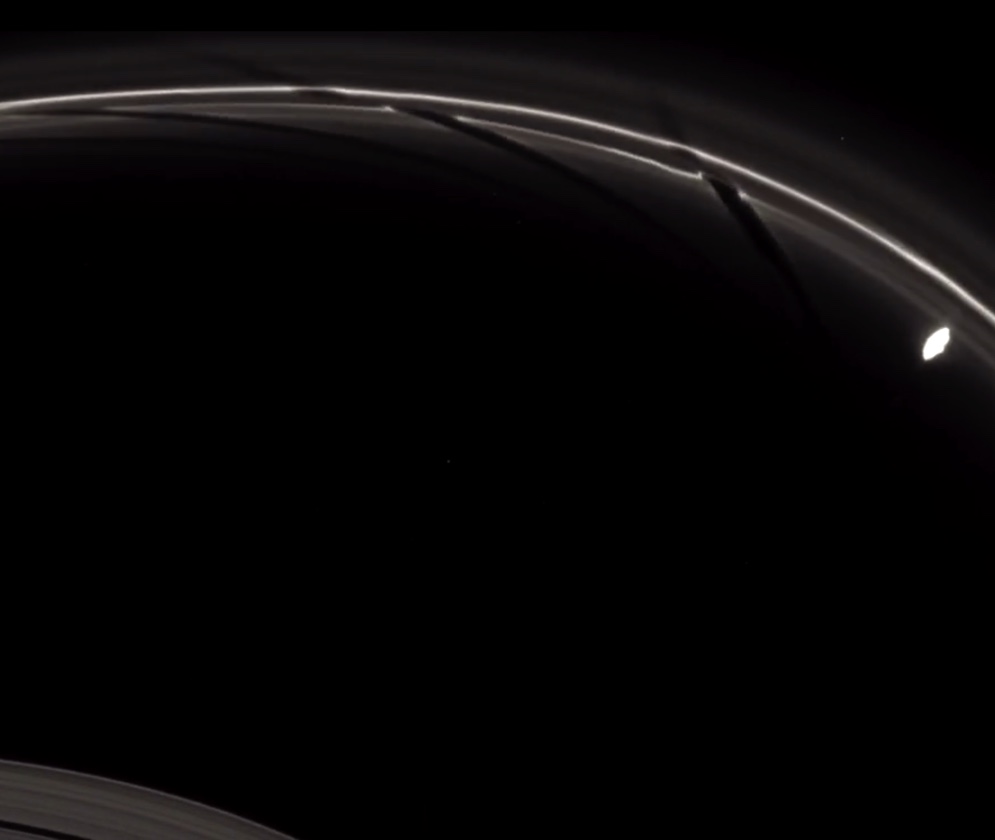 The ambient orchestral music of The Highest Planet: PART 1, emphasizes tone and atmosphere over traditional musical structure or rhythm. In some ways it lacks net composition, beat, or structured melody. It is intended to be listened to as a sonic journey through the more distant parts of our own Solar System, and of course, the themes are much informed by the information gathered by the flybys of NASA's Voyager, Pioneer and Cassini spacecraft missions. 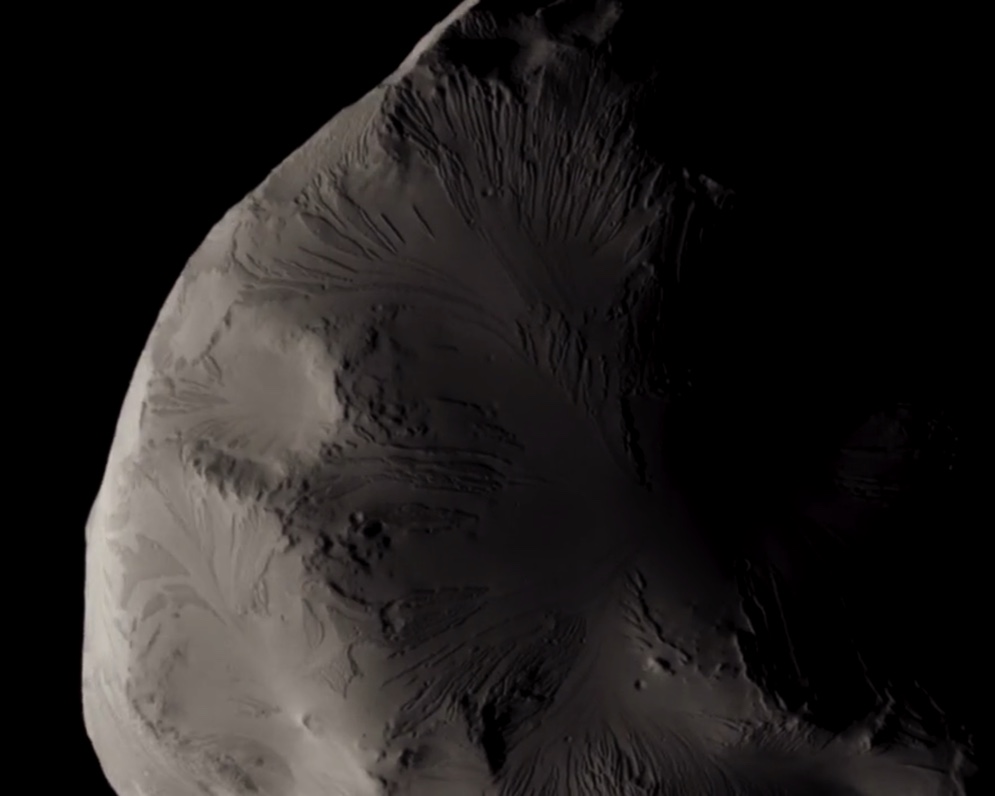 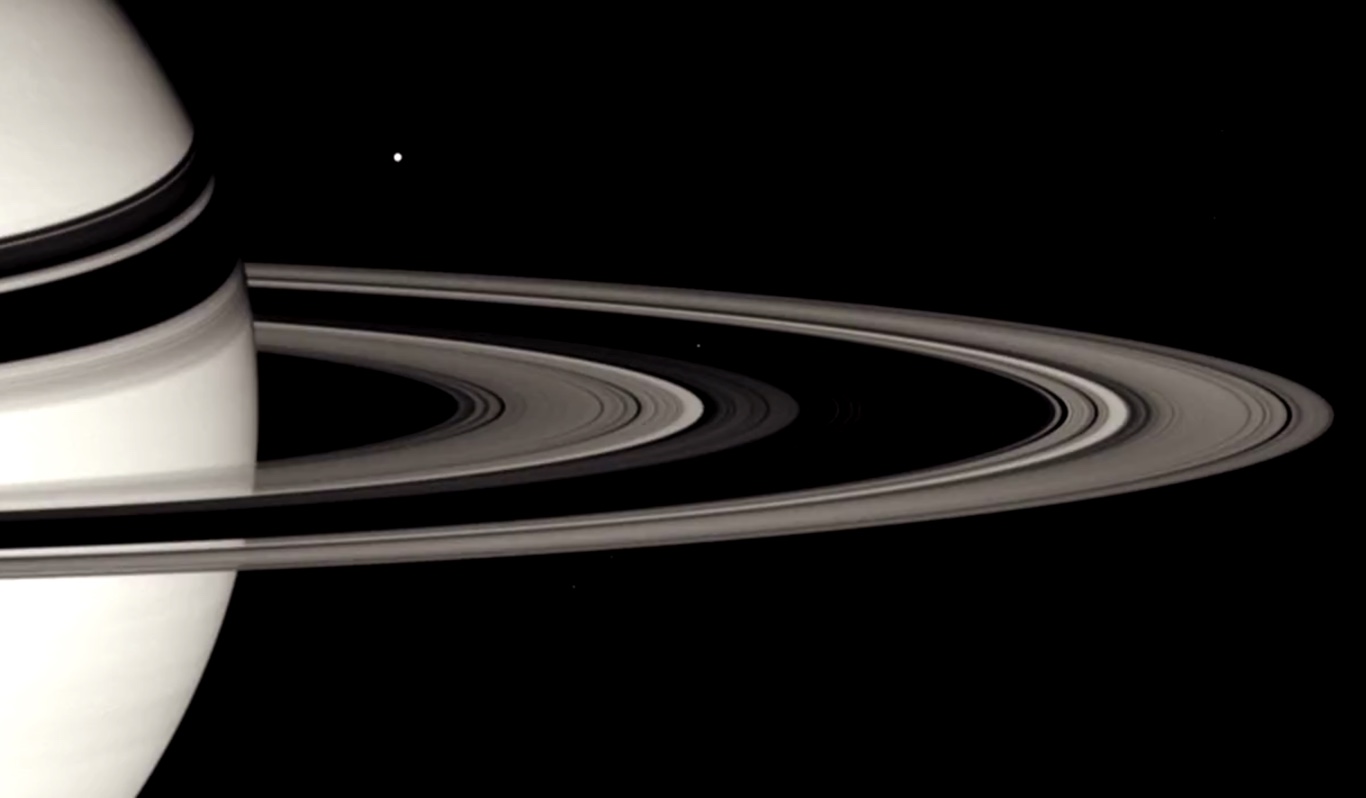 These pieces tend to be both retro and cutting-edge experimental in their style of composition, and are an epic and bombastic pairing of classical orchestral instruments with electronic synthesis sounds. There is a certain consistent sort of spacey ambient 'electronica' depth to the sonic environment, with lots of echoes, reverbs, delays, and other special effects based on "found sound" and ambient "noise" elements along with the more or less traditional (and newly invented) instrument voicings, harmonies and melodies of the themes of the Rings of Saturn and the Moons of Saturn.

From the distance it looks like Saturn has seven large rings.

The order of Saturn’s rings (starting from the inside) is D-C-B-A-F-G-E. They were named like that in the order of discovery (A was discovered first, then B, C, and so on). This naming convention gives a hint at which are the brightest rings, and which of them are less obvious (the rings that were discovered first are the brightest and most obvious). The rings do not sit still. They circle around Saturn at very high speeds. A closer look shows that each large ring is made up of many small rings. The small rings are sometimes called ringlets.

In The Highest Planet Suite - Part 1: The Rings of Saturn (SIDE A),
the track names are in the following order:

Track 3 - The B Ring (Brightest Ring)

The first ring discovered was named the A ring, but it is not the ring closest to or farthest from Saturn.

Part 2: The Moons of Saturn

There’s way more to Saturn than its majestic rings. The moons of Saturn are numerous and diverse, ranging from tiny moonlets only tens of meters across to enormous Titan — a giant, icy world bigger than our Moon. There’s also Enceladus, a bright, white ice ball with a liquid-water ocean wrapped inside its frozen shell, that continuously erupts as a towering water plume through cracks near its south pole.

While all of Saturn's moons are intriguing, researchers have been particularly curious about six small, odd-shaped satellites that are nestled against the edge of its rings and sport different colors. Fortunately, the Cassini Mission flybys were able to collect detailed data on five of them — Daphnis, Pan, Atlas, Epimetheus, and Pandora — allowing scientists to solve yet another mystery about our solar system's second-largest planet. Pan, named after the flute-playing Greek god of hunters and shepherds is nestled in the planet’s rings, and is known for looking something like a ravioli floating in space.

Saturn has 82 Moons with confirmed orbits that are not embedded in its Rings.
Only 13 of Saturn's Moons have diameters greater than 50 kilometers.

In 1847 the seven then known moons of Saturn were named by John Herschel (Son of William Herschel). Herschel named Saturn's two innermost moons (Mimas and Enceladus) after the mythological Greek Giants, and the outer five after the Titans (Titan, Iapetus) and Titanesses (Tethys, Dione, Rhea) of the same mythology.

Twenty-four of Saturn's moons are regular satellites; they have prograde orbits not greatly inclined to Saturn's equatorial plane. They include the seven major satellites, four small moons that exist in a trojan orbit with larger moons, two mutually co-orbital moons and two moons that act as shepherds of Saturn's F Ring. Two other known regular satellites orbit within gaps in Saturn's rings. The relatively large Hyperion is locked in a resonance with Titan. The remaining regular moons orbit near the outer edge of the A Ring, within G Ring and between the major moons Mimas and Enceladus. 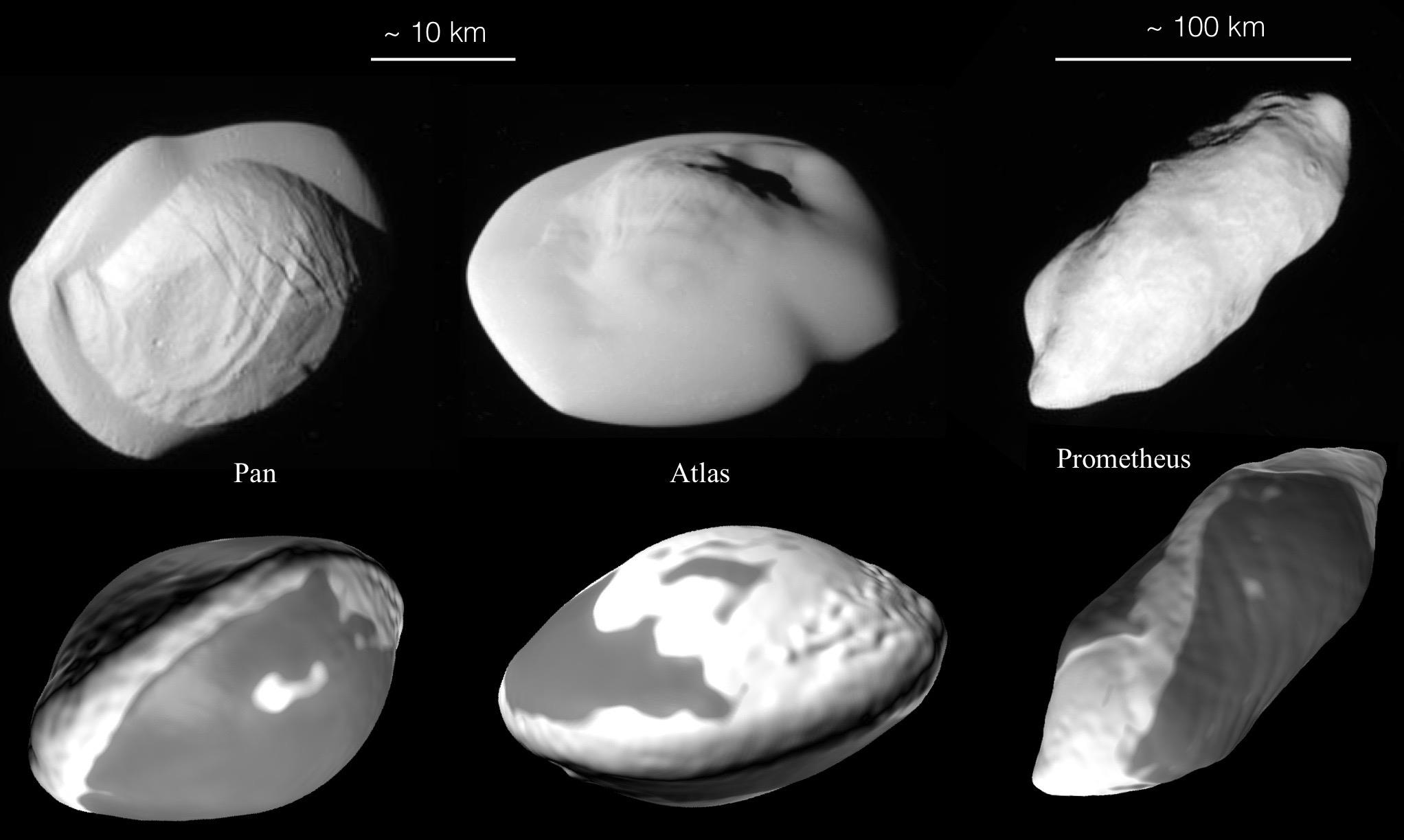 In a new study published in the journal Science on March 28, 2019, a team of 35 researchers, led by Bonnie Buratti of NASA's Jet Propulsion Laboratory in Pasadena, California, reported that the tiny moons located inside, or near, Saturn's rings are the result of the accumulation of material from the surrounding rings, which has settled around a dense core. They suspect the core is a remnant of a larger object, which broke apart, resulting in multiple smaller "moons."

The scientists arrived at this conclusion after observing that the moons' surfaces were covered with ice and dust and were highly porous. They maintain the porosity also explains the satellites' ravioli-like shapes, as the material has accumulated around their equators rather than at their poles. 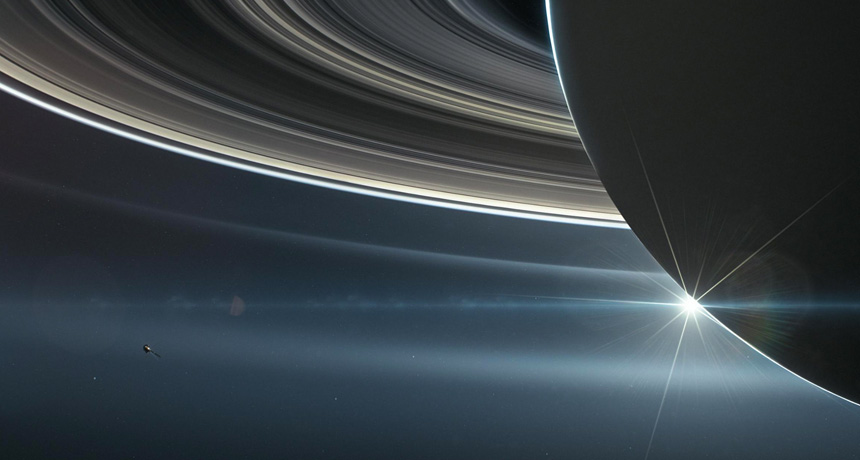 As for the different colors? The scientists suggest that Pan and Daphnis, which circle around the innermost red rings, sport a similar hue due to the deposits from the rings. The experts suspect the red material is a blend of organic compounds and iron. Though Atlas, Epimetheus, and Pandora, which are situated on the outside of the massive planet's rings, have similar deposits, they appear blueish. The researchers believe the color is caused by the bright icy particles and water vapor from Saturn's frozen larger moon, Enceladus.

"The daring, close flybys of these odd little moons let us peer into how they interact with Saturn's rings," Buratti said. "We're seeing more evidence of how extremely active and dynamic the Saturn ring and moon system is." 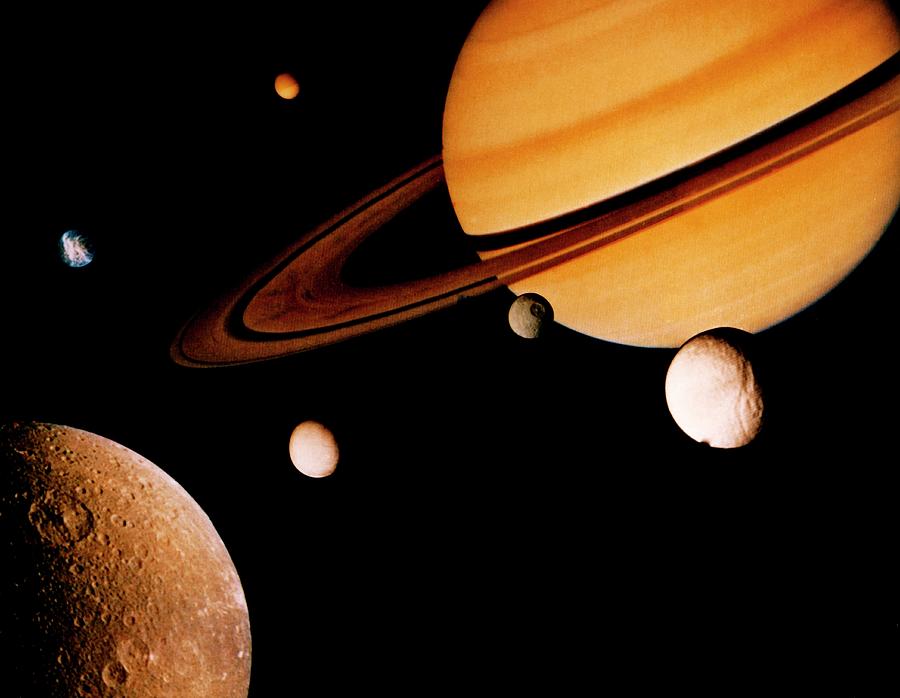 Saturn’s so-called shepherd moons, have the effect of clearing out a 200-mile-wide space in Saturn’s rings known as the Encke Gap

In the mid-1980s, astronomers noticed that the ring edges along the gap had a scalloped appearance, almost like waves of water. Eventually through research and calculations they found that the gravity wakes of the small moons orbiting within the gap have created the scalloped wave pattern at the ring edges.

The gravitational tug-of-war of the Saturnian Ring–Moon system, which causes a range of dynamic interactions including the 'anomalies', 'divots', 'gaps', 'propellers', 'scallops' and 'spokes' of the Rings, and the surprising colors of the Moons, are ample inspiration for the high energy and complexity of the uptempo electronic dance music style of The Moons of Saturn.

In The Highest Planet Suite - Part 2: The Moons of Saturn (SIDE B),
the track names are in the following order:

Track 4 - Enceladus (is a Rocket Moon)

NOTE: If you are having issues with the Audio PLAYER, try using Firefox browser (instead of Chrome).